At the head of the “Orchestre des Symphonistes d’Aquitaine” that he created in 1995, Philippe Mestres leads a career as a conductor, in the symphonic and lyrical fields.

As such, he shows a particular interest in opera, a genre he is particularly fond of, with more than thirty works in his repertoire (Carmen, Fidelio, Bohème, Tosca, Faust, Lakmé, Traviata, les Pêcheurs de perles, La Flûte enchantée, les Contes d’Hoffmann…). 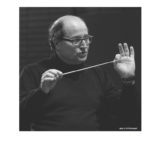 On several occasions, he had the pleasure of conducting the great Korean soprano Hye Myung Kang, notably in “La fille du Régiment” and “Madame Butterfly”. He was invited to conduct “Carmen” at the Bolshoi Theater in Minsk (Belarus).

Passionate about artistic and pedagogical transmission, he was the director of the Conservatoire Maurice-Ravel de Marmande, from 2007 to 2020, after having held the position of Study Advisor at the Bordeaux Conservatory. He is a member of the “Forces Musicales”, a national union of orchestras, opera houses and opera festivals.

Through all his activities as a conductor and teacher, Philippe Mestres demonstrates a strong personal and philosophical conviction which can be summarized as follows: “Music belongs to all”.

A graduate of SKEMA Business School (Ecole Supérieure de Commerce de Nice Sophia-Antipolis), he began his career in the management of cultural companies and, in particular, at the CNIPAL where he developed a professional training center, allowing young artists access to the French and international opera scenes.

At the same time, he became involved in the associative field, where he was in charge of the structuring and responsibility of the Marseille International Opera Competition, then of the Musiques dans les Vignes Festival (Haut Vaucluse).

In Bordeaux, in parallel to his functions as Administrative and Financial Manager of Aquitaine Culture, he works with job seekers and artists in the context of training courses at INSTEP and collaborates with ICART where he provides interventions in “Management and management of cultural enterprises” for Bachelor, Master and MBA degrees. Finally, he puts his dual expertise in culture and continuing education at the service of the artistic structures of the New Aquitaine, particularly with the Consulting Agency and Consulting Two on a Bench.

Anecdotally, but nevertheless important, Manuel Sebastian has been made Knight of the Côtes du Marmandais, whose excellence he never misses an opportunity to defend!

Graduated in piano at the Conservatoire National de Région de Toulouse, she holds a CAPES in Music Education. For 20 years, she has taught in music classes in secondary schools in Marmande.

After 17 years as conductor of the Val de Garonne Choir (awarded at the vocal anthology of Tours in 1989), she was entrusted with the direction of the Maurice Ravel Vocal Ensemble within the Municipal Conservatory (classical repertoire: Requiem by Mozart and Duruflé, Lauda Sion Mendelssohn, Stabat Mater by Poulenc etc…).

Jean-Marc FONTANA began his musical studies at the Conservatoire de Nice, studies which were rewarded with a piano prize, a solfège prize, a deciphering prize, a harmony and counterpoint medal and a chamber music diploma.

From 1981 to 1983, he was repetiteur pianist of the singing class of the Conservatoire de Nice, then from 1983 to 1985, he occupied the same position at the vocal and dramatic workshop.

He took part in the creation of Médée at the Opera of Lyon. He is Chief Vocalist at the Grand Théâtre de Bordeaux under the direction of Alain Lombard.

He is also pianist accompanist of the International Singing Competition Placido Domingo. As a Conductor he has had the opportunity to work with prestigious conductors (Alain Lombard, Roberto Benzi …) and to accompany in recital, staging and special work of many singers. He also masters the opera and operetta repertoires.

The Association
board of Directors

The Pianists* of the International Singing Competition

*subject to change without notice

Behind the scenes, they bring the Nuits Lyriques to life and participate in their organization. They are the strength of the Festival and the International Singing Competition…